An integral renovation of a posh apartment located on a distinctly French-style block in the Retiro district. A classic façade blends in with a bright, contemporary space, by achieving a sense of harmony and balance.
Read more

This integral reform posed a double challenge for the Studio. On one hand, the renovation took place inside a listed historic building; on the other, it meant carrying out a project for a successful colleague. These were strict demands but not impossible to conquer, as can be appreciated from the results. Indeed, the apartment is located in a classic building on the corner of Juncal street, which is very close to the traditional Retiro train station. Boasting the best of very French-style architecture, the apartment is set within an urban façade that sprawls out to cover the whole block, embodying one of the finest examples of French architecture which prevailed in this part of Buenos Aires during different decades in the XX century.

There was no doubt for the Studio that the remodeling plan should preserve the aesthetic virtues of the building and its corresponding patrimonial value. The owner of this apartment is Ernesto Bedmar, a prestigious architect originally from the Argentine province of Córdoba, who has been living and working in Asia for the past 30 years. Conceived as his pied à terre in Buenos Aires, Ernesto chose this particular corner of the city because it is graced with tradition, charm and different neighborhood art galleries. Even though his personal style tends towards enhancing colors, when it comes to architecture his vision is similar to Jorge Muradas’ approach; actually, so much so as to entrust his colleague –no restrictions imposed– with the design and renewal of his own home.

Inside, the apartment had already been stripped of its original molding and other period details. A decision was made to introduce a contemporary flair by generating an uninterrupted space, with practically no divisions: the study, living room and dining room run along the U-shaped corner of the building.

On opposite sides of the apartment, a series of mirrors seem to multiply the space available: on one tip, the mirrors are placed on fixed panels; on the other extreme, mirrors are placed on metallic book shelves with sliding modules which also serve to divide the dining room from the bedroom.

This element was designed by the contracting party. Every choice made tended towards the broadening of all visuals.

The kitchen includes the original maid’s quarters which have been integrated into the main space. Renovated within clear contemporary lines, American oak flooring was chosen as a way to standardize all apartment floors, which are made of Slavonian oak.  Some flooring was original whereas other areas had to be custom-made to replicate the original wood. Similarly-colored marble was selected for the kitchen island, counter tops and backsplash.

The bathrooms were entirely renovated, with New York subway-styled tiles together with the same type of marble used in the kitchen. The original laundry space is now a passageway which leads to the guest bathroom.

As for the walk-in closet, once again, the choice was American oak. An intentionally limited color palette seen in diverse materials is the signature trait of the Studio, always striving towards a smooth, homogenous effect which translates into an esthetic statement.

The result is a minimalist layout, reminiscent of John Pawson, with an absence of barriers between rooms, with luscious views that open up towards the famous Plaza San Martín, as Juncal street broadly slopes down towards the train station with light pouring in through every window. The design becomes an interior skin which manages to breathe new life into this historic property by bringing it into the present with outstanding elegance. 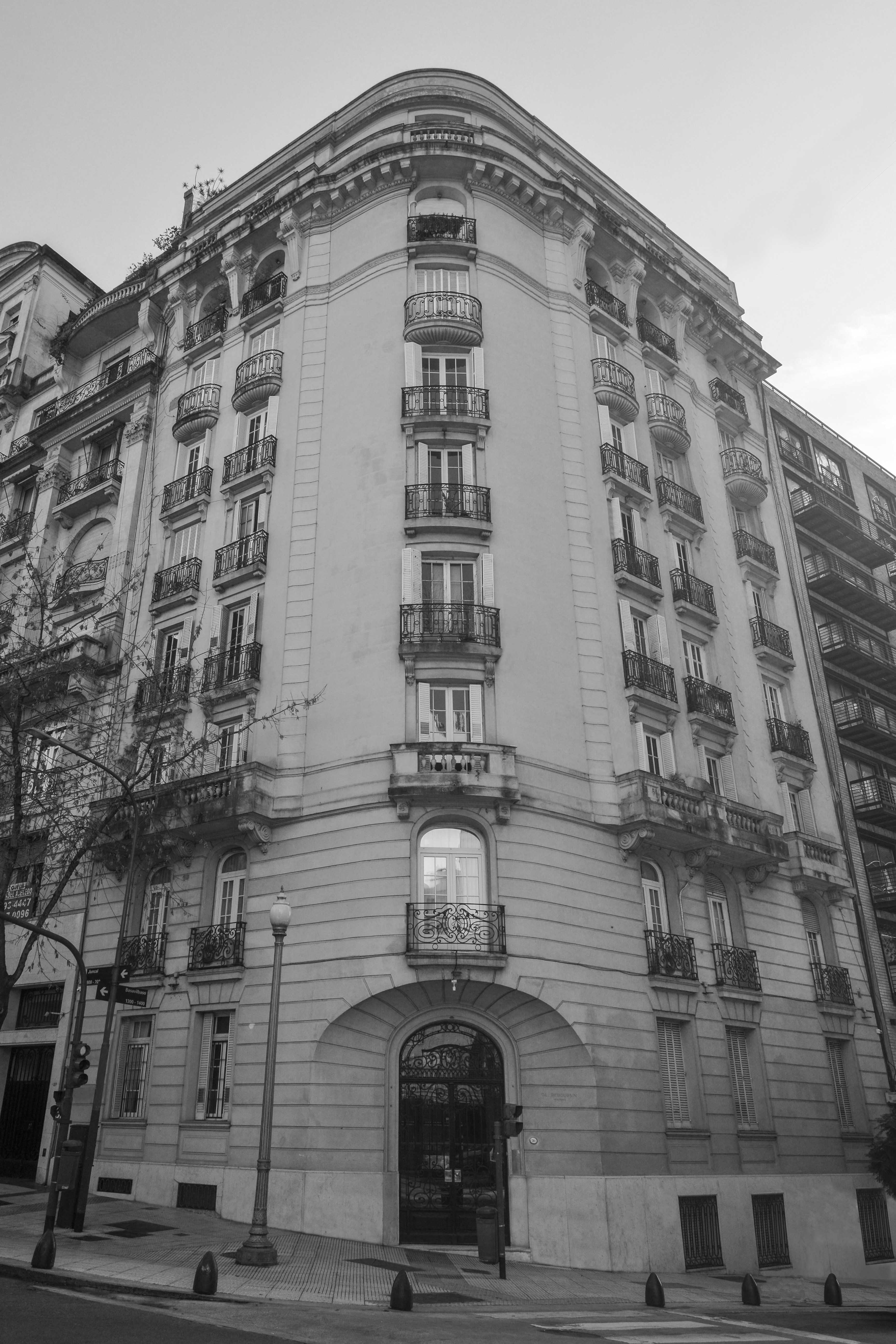 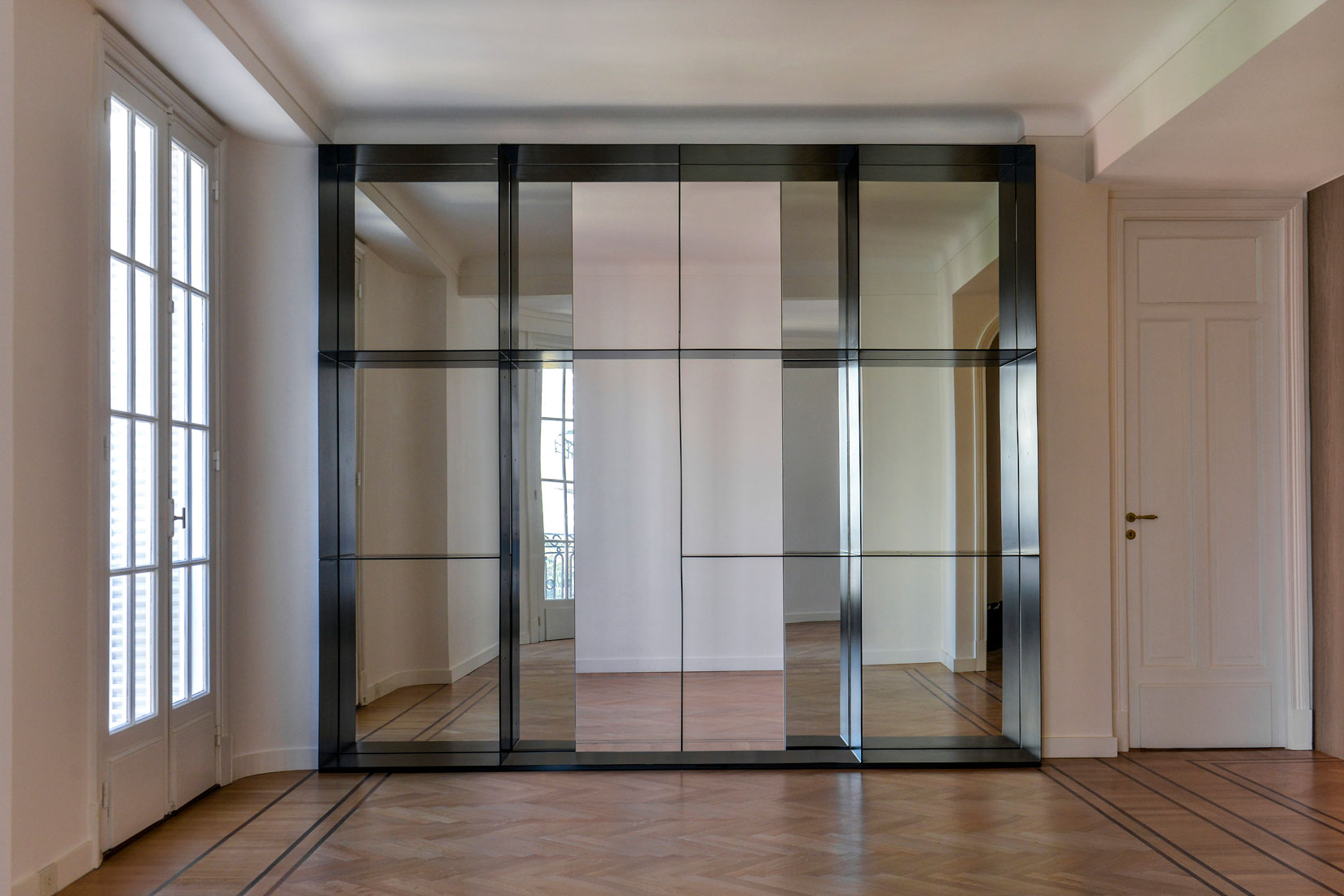 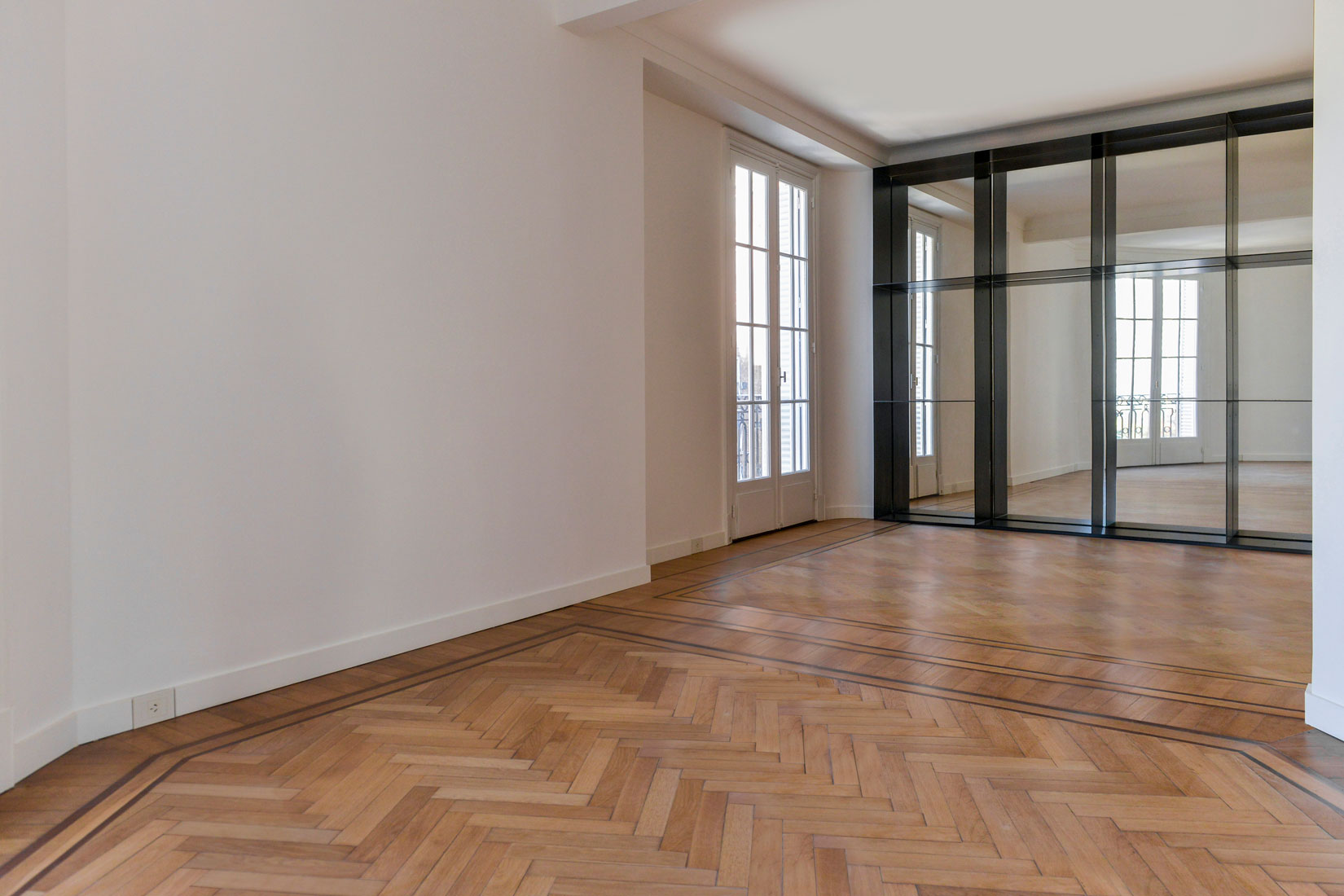 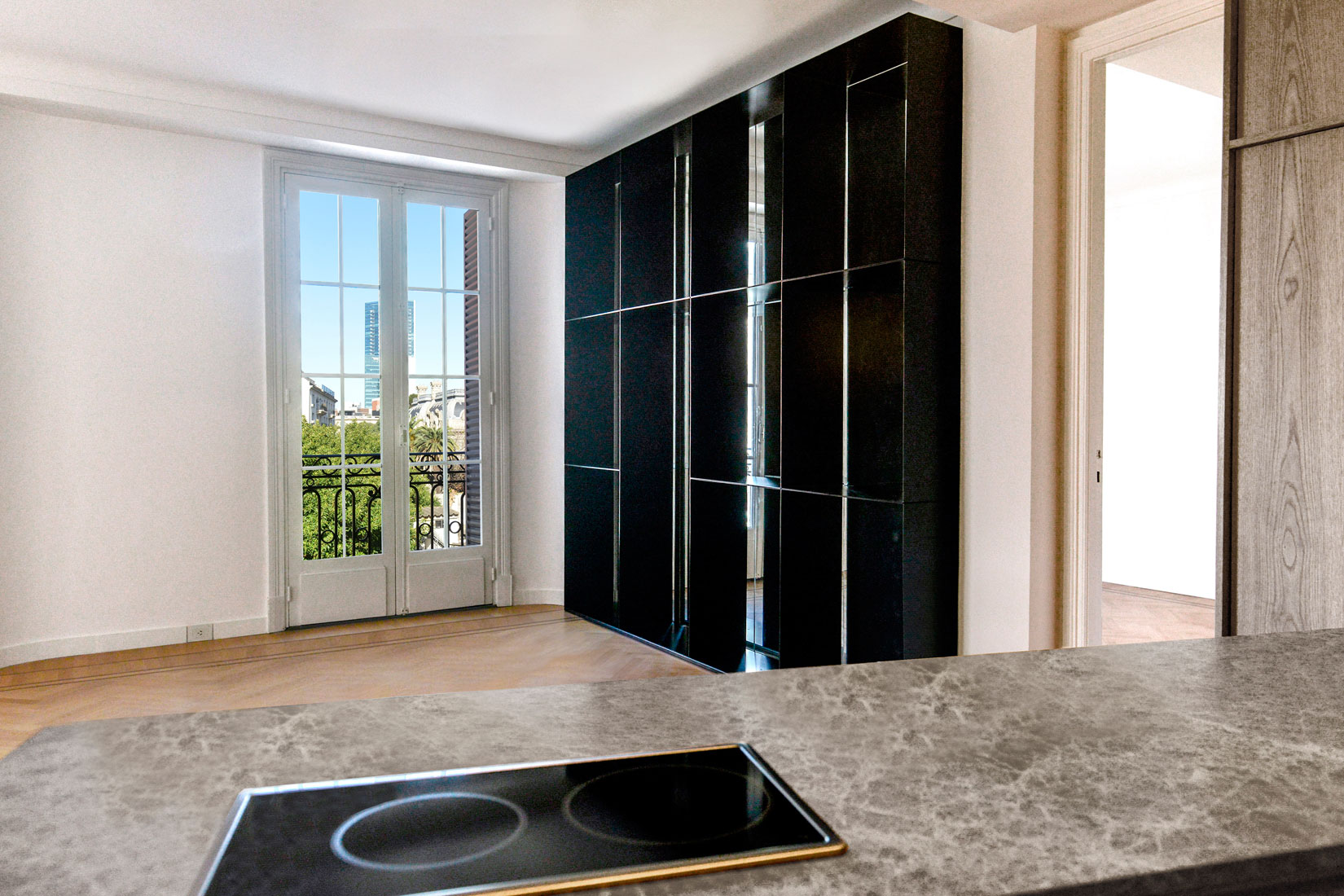 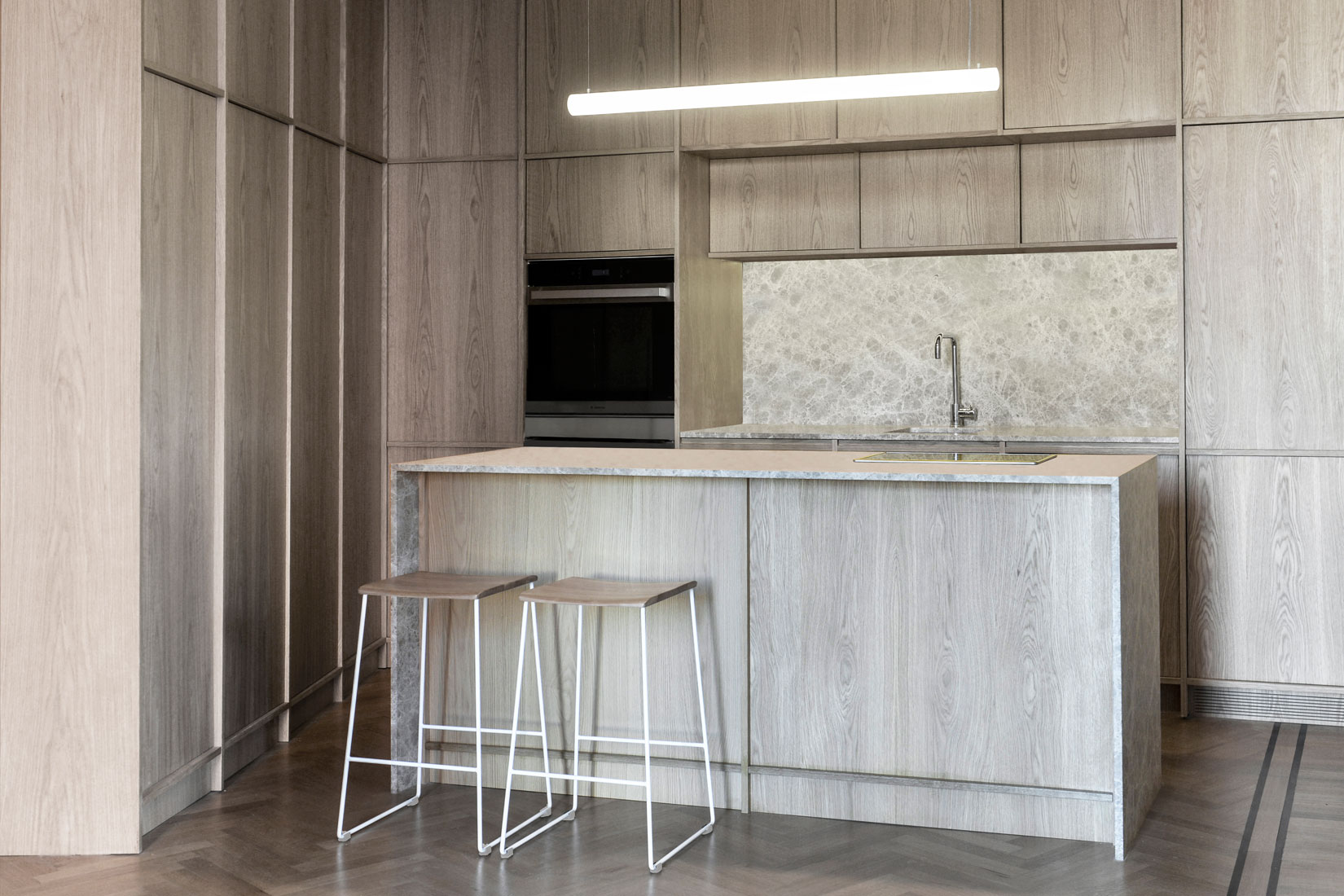 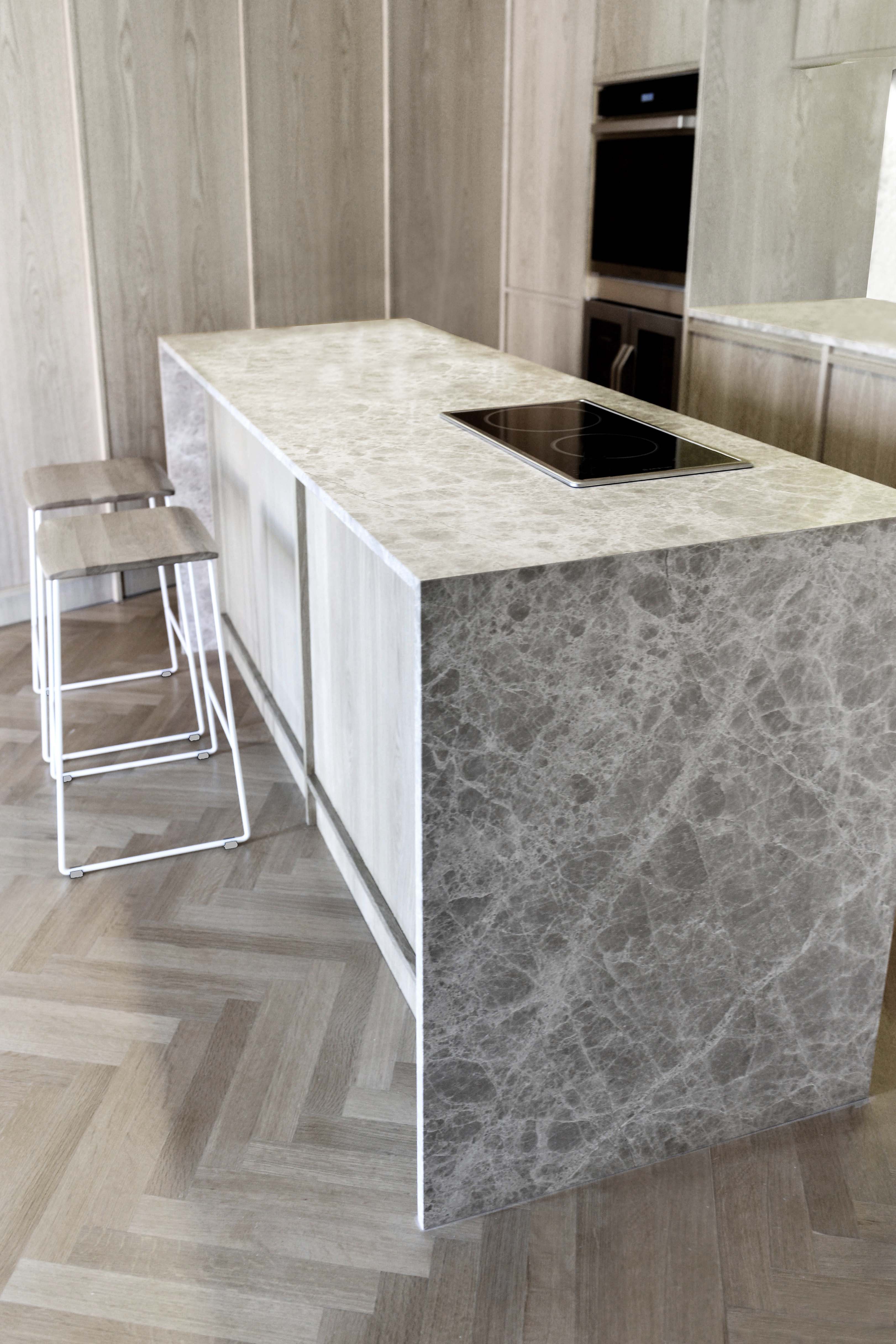 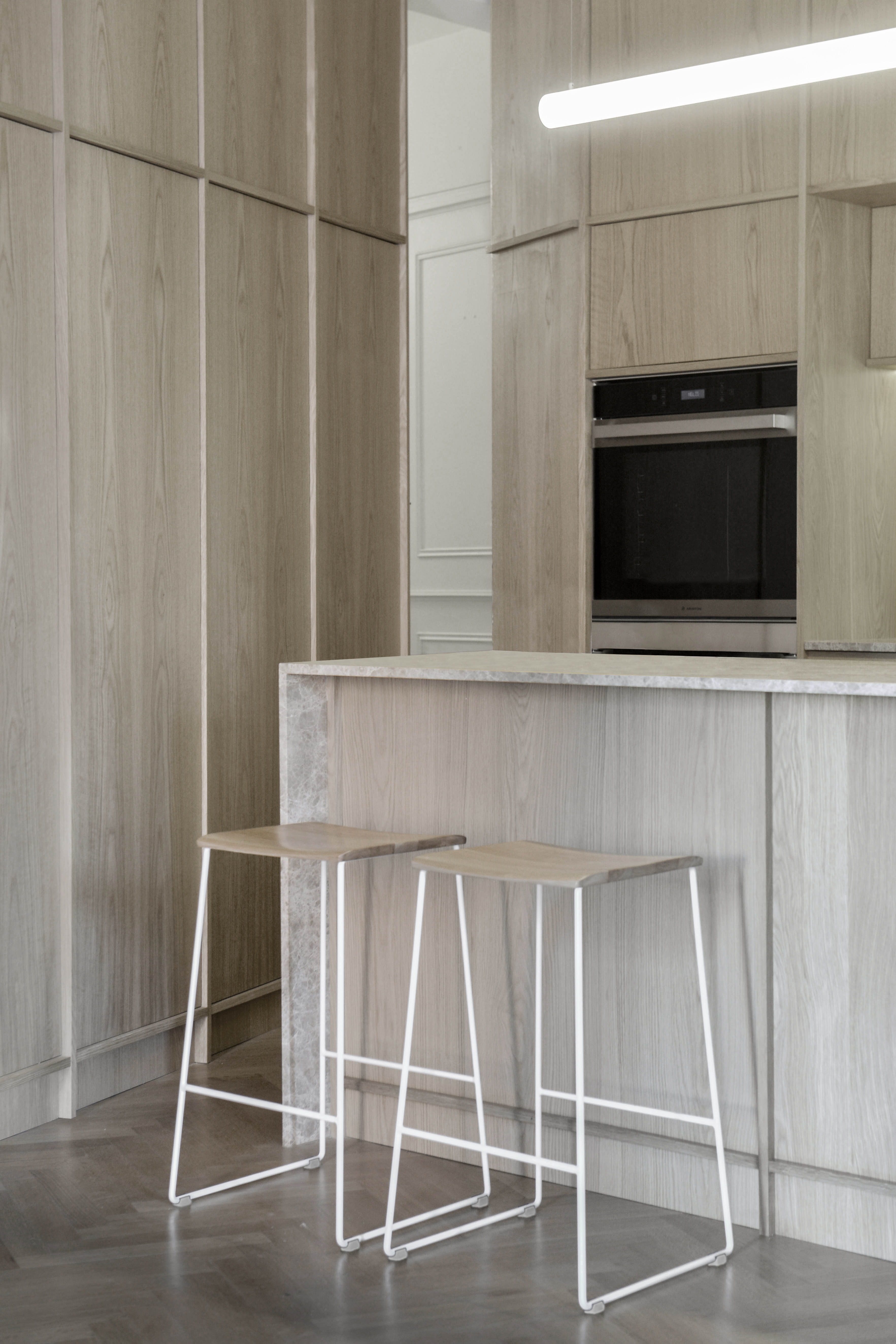 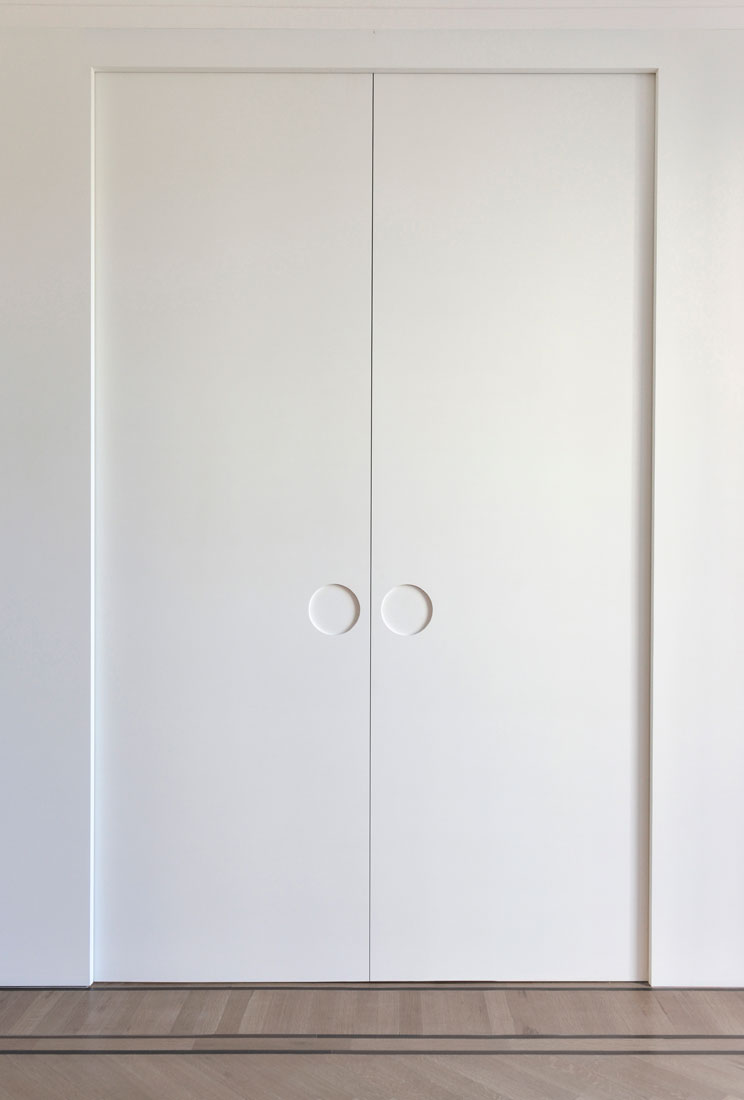 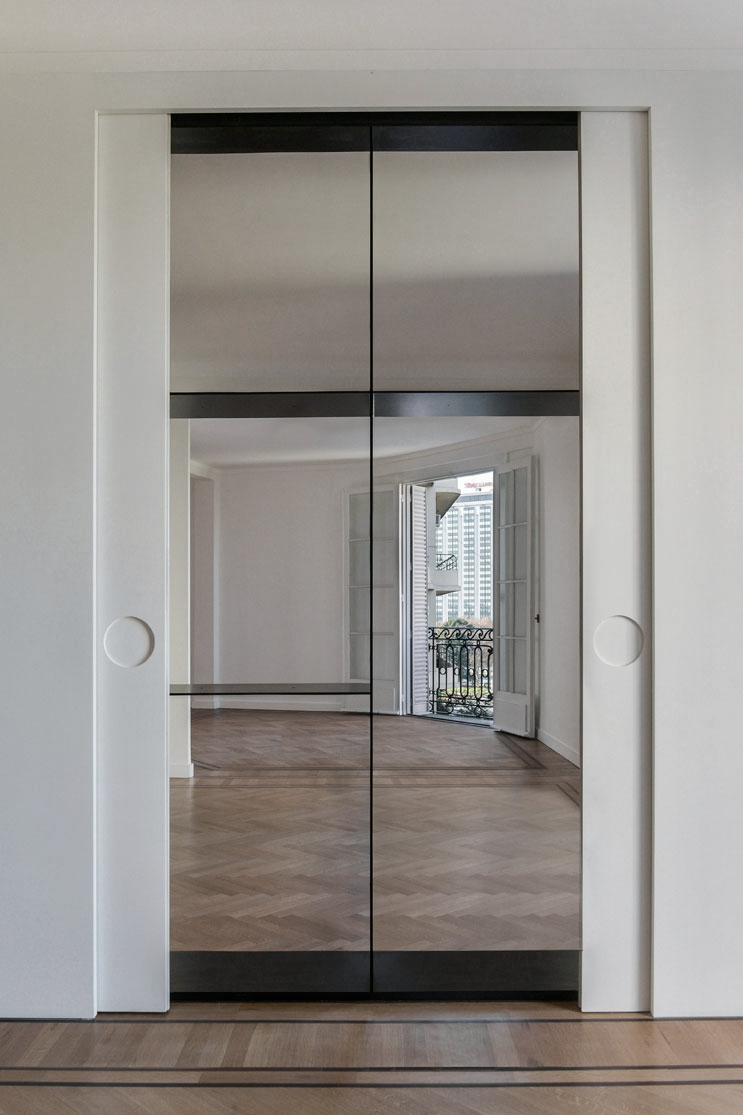 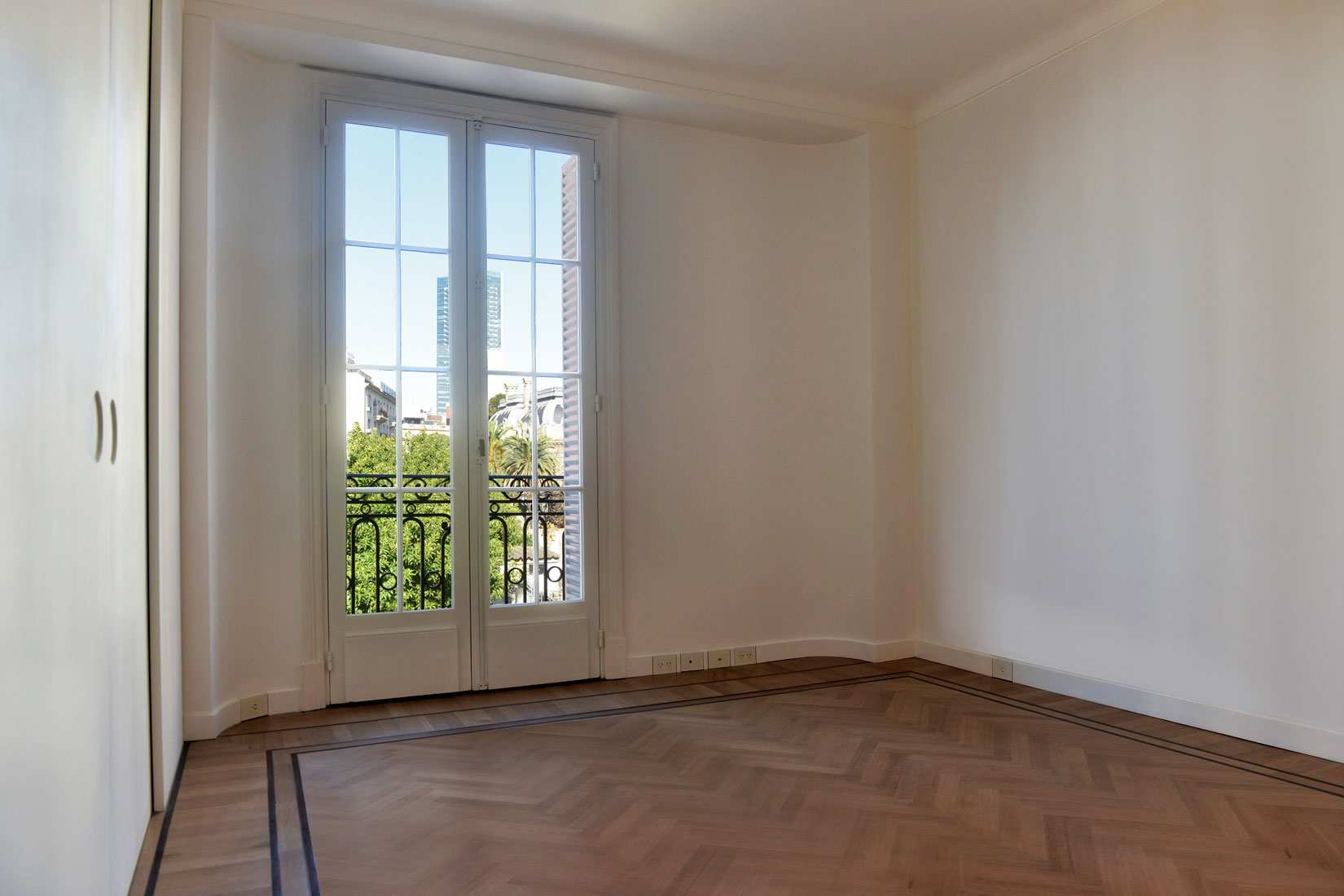 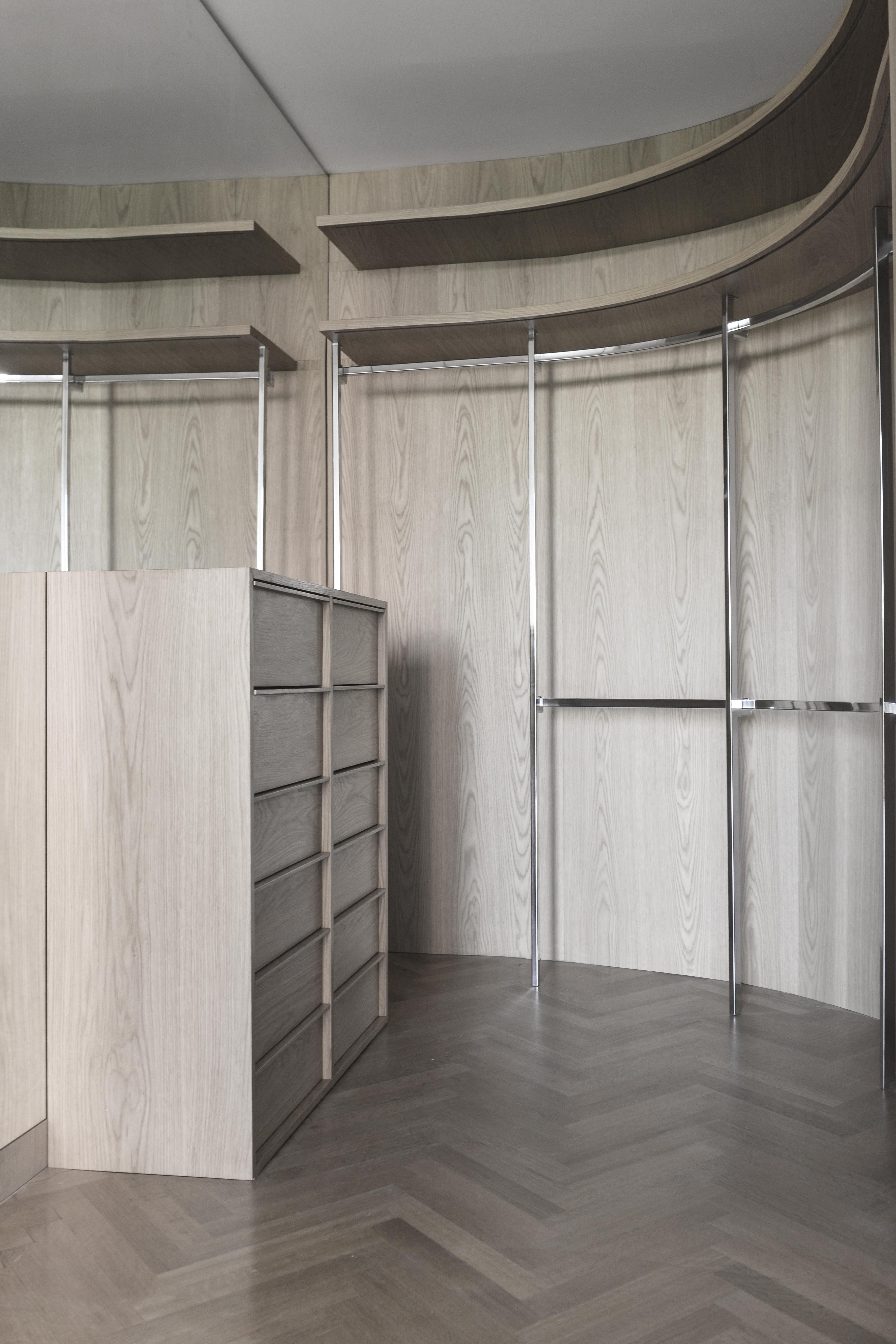 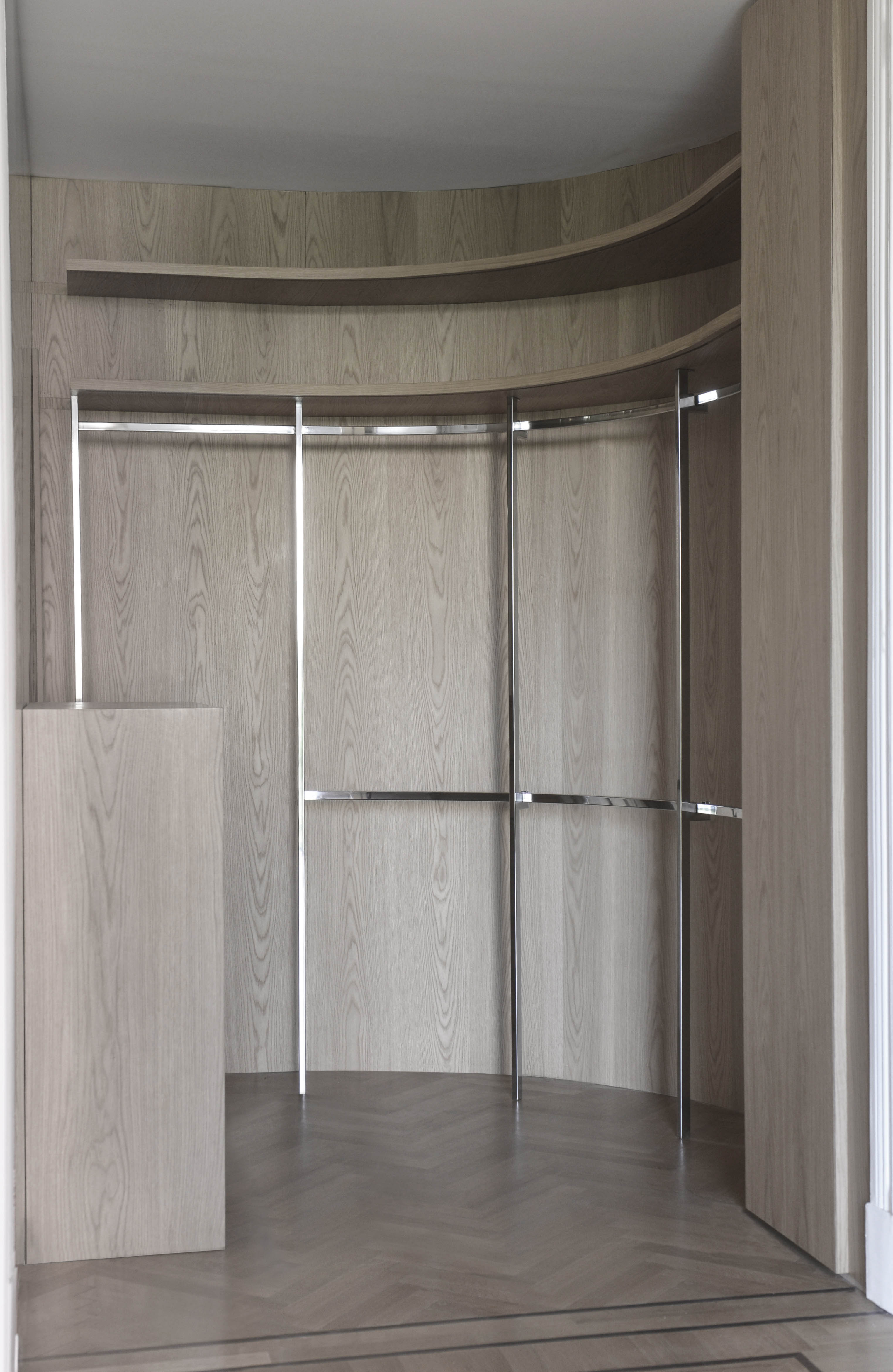 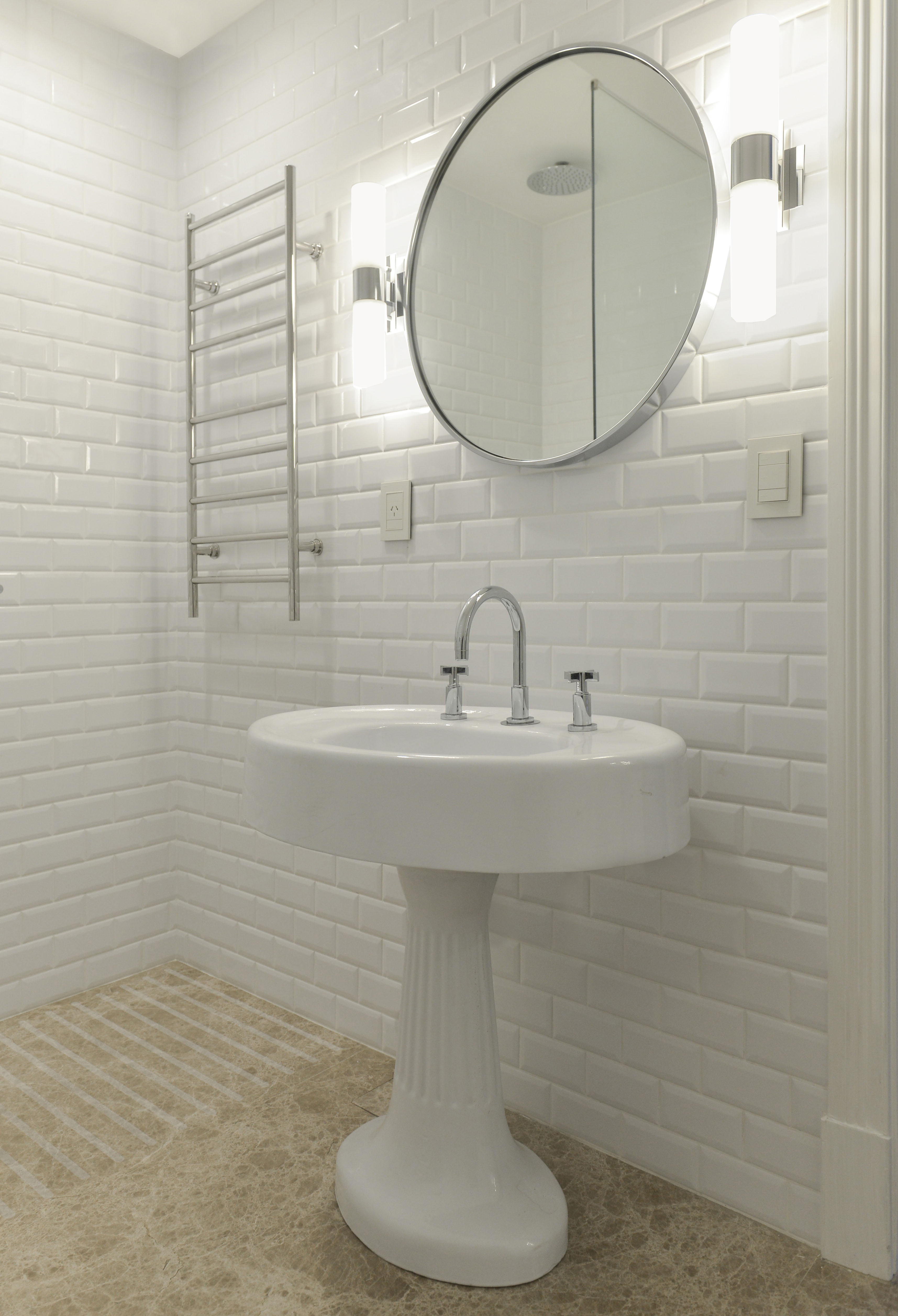