Like so many other weekend homes which have been turned into permanent residences during the pandemic, this estate was completely refurbished just in time. It is a testament to symmetry and airy elegance while being, at the same time, casual and cozy enough for a family that thrives on leading a relaxed lifestyle. Read more

Before making the final decision to purchase the house they had their eye on, the future owners invited architect Jorge Muradas to get his opinion on the property. Muradas was categorical: the house had great potential.  Next, a profound intervention was decided upon. By taking into account the original symmetrical floor plant as the pillar of the project, Muradas proposed radical changes to alter the overall appearance of the house.

The most significant renovations were carried out on the façade and the galleries. On the front, a vertically shaped prism that had originally offered access to the house was withdrawn to allow for a courtyard instead, creating a space that serves as a transition area between the street and the interior of the house. This modification creates a friendly atmosphere for arrival. In front of the wall that sets the limits for this courtyard, a pergola was extended forward, in two sectors, to allow for cars to be parked in the shade. It was all completed in a low-key, welcoming style.

This extensive area, created as a result of the intervention, is reminiscent of leisure attributed to a beach house or country home because it provides a spacious outdoorsy feeling that is contained within beautiful boundaries; the benches, the topiarios buxus plants in large flowerpots and the garden that peeks in from both sides. The same effect was enhanced by other fundamental choices. First, through the color palette: white is present in all aluminum carpentry and pergolas and a soft grey turns up in the micro-textured cladding on exterior walls. Another related choice consisted in generating a pattern of vertical lines on the wall, a sort of thin board effect, achieved by perforating the cladding, all of which confers an informal mark that is both fresh and original.

The characteristic atmosphere surrounding the house is that of lightheartedness, the kind you would enjoy at a vacation home. All equipment – in general treated wood – resembles the indoor furniture because the outdoor spaces are frequently in use.

As for flooring, large concrete sheets made in situ were placed at the entrance. For the courtyard and galleries, grey athermic tiles were chosen for a contrasting effect with the green from the lawn surrounding the house. Keeping with the double objective of achieving simple maintenance  ?  which is always ideal for a weekend home  ?  while using few materials to create a harmonious and definitive feel, large cement-look porcelain tiles were chosen for the interior in the same color tones. The ensemble reflects the characteristic Muradas Studio touch, which is always striving towards spaces that breathe out a smooth sense of oneness overall.

The living room functions as the center of the home, not only because of its physical location but also because it is the space most utilized by both adults and children. Translucent and visually impeccable, it offers very simple equipment: a wooden bench as a welcoming piece at the entrance, large fluffy couches full of cushions and low tables with marble tabletops. Two paintings by Ignacio de Lucca are the esthetic staples that set the atmospheric tone. There is a privileged view from this room. Even though integration rules, two wooden arcades where incorporated to create a virtual separation between living room, dining room and kitchen. The dining room, on one side, is a stark example of the general warmth sought around the house: wood, David Trubridge bamboo lamps which playfully create different climates, and three black wood sculptures by Carlos Vignolo. On the other side, the kitchen was completely renewed and even expanded by adding an area previously used as a service room. A wall covered in lacquered wood, which copies the façade’s vertical lines, appeals to the eye of the observer, as do the three identical windows and blinds, made out of the same material, to replicate the visual effect of the pergolas. The state-of-the-art kitchen equipment includes refrigerators, ovens, a wine vault, a stove and a kitchen counter extractor which allow for unobstructed visuals.

On the top floor, where symmetry rules once again, there is a distribution hall  ?  decorated with a sofa and a set of enormous seagrass plates hung as artwork ?  which leads into the master bedroom with its bathroom and dressing room, and also into the children’s bedrooms; while facing the front of the property, the hall flows into a guest room and the owner’s study. The equipment in the children’s bedroom is very practical: beds with covers for the bedrests which can easily be washed and changed. In the master bedroom, a bed made out of wood with an upholstered bedrest stands out. The furniture, the rugs, the lamps and all accessories decorating these spaces are pieces that belong to the Acento Muradas collection. The flooring on the top level is the original one, although it was completely painted white with specially treated paint. The bathrooms were completely remodeled and covered with the same cement-look tiles used on the ground floor. Calacatta marble was selected to cover the walls, and the counter and sink made out of Corian were designed by the Studio, just like all the rest of the fixed equipment in the house. 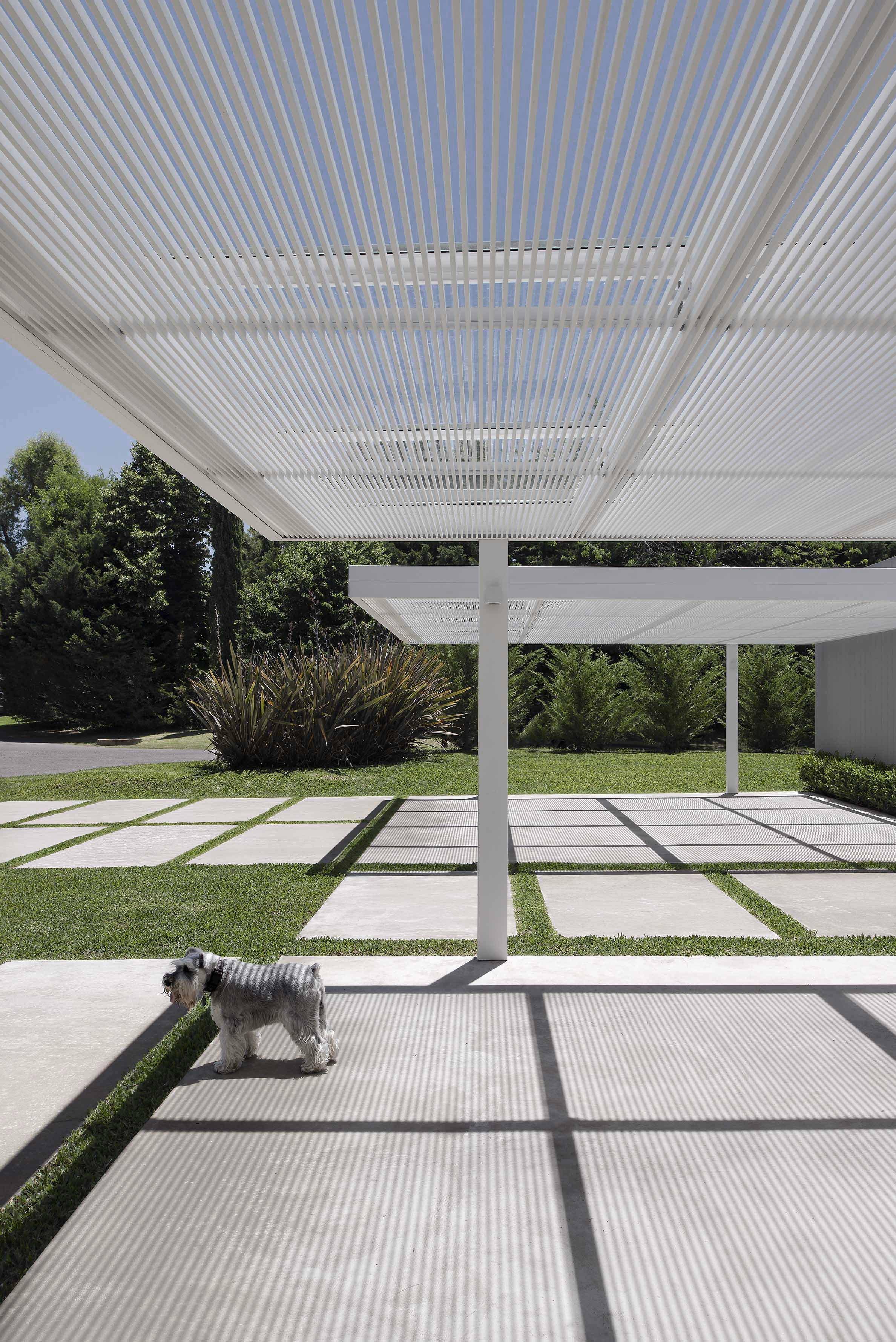 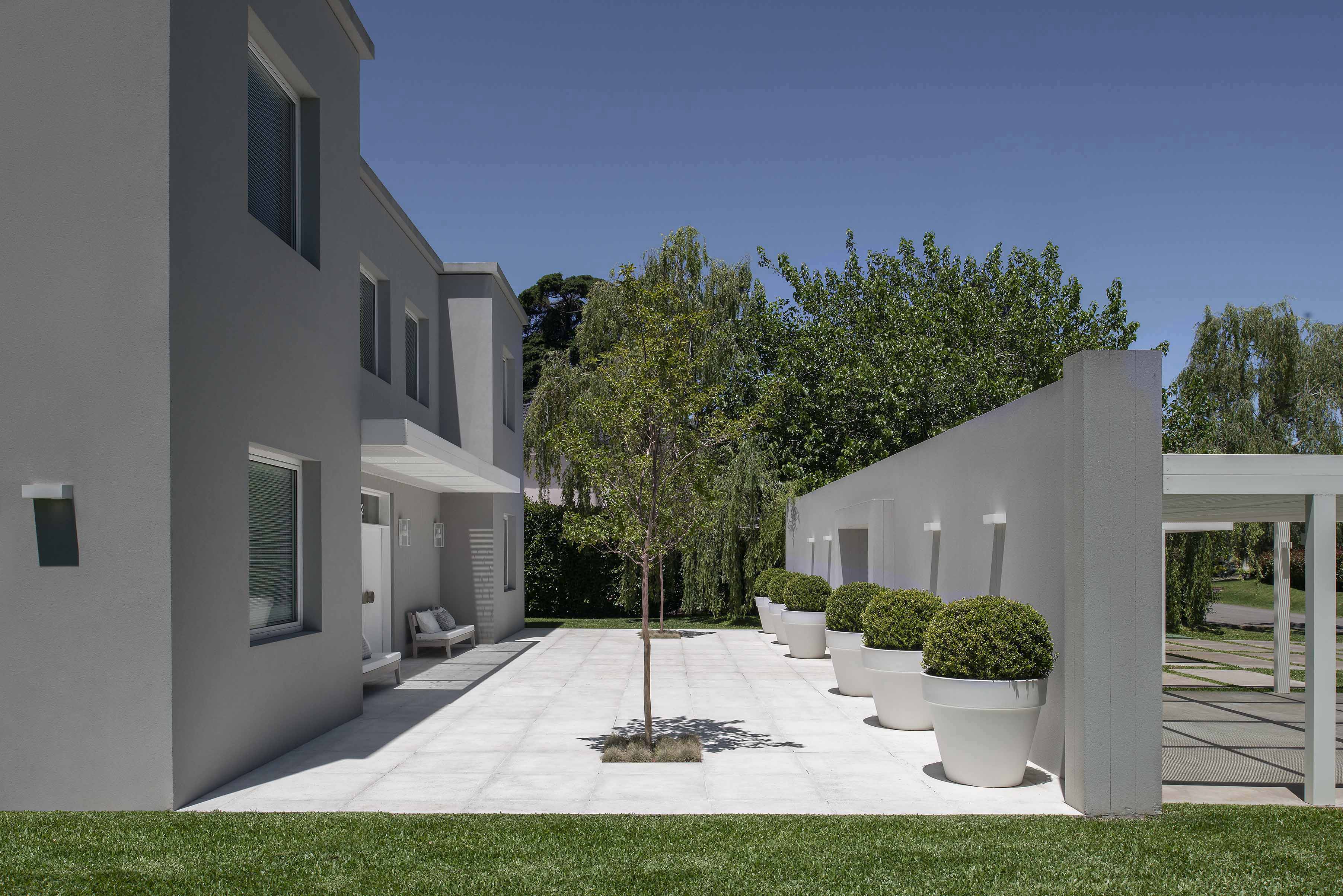 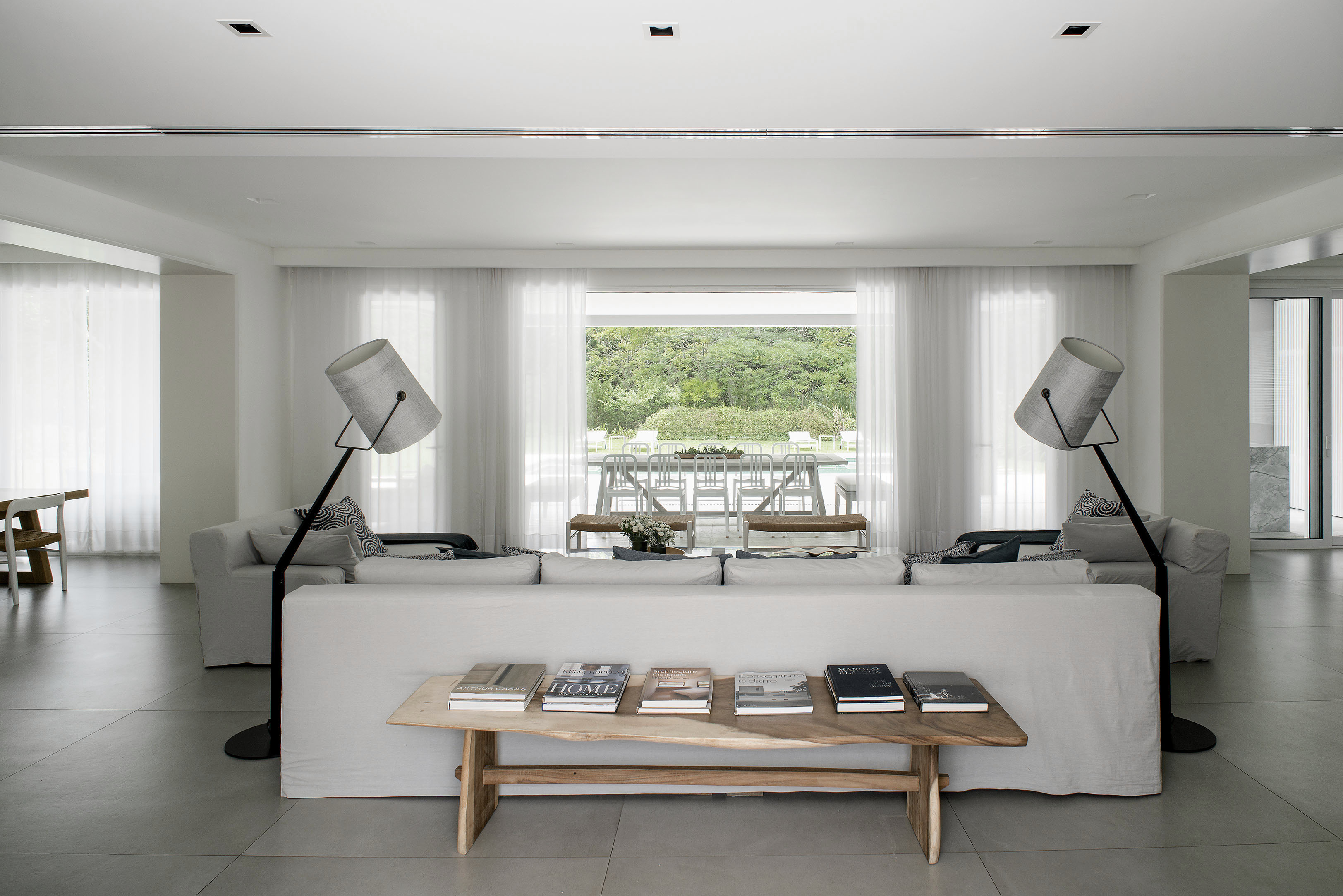 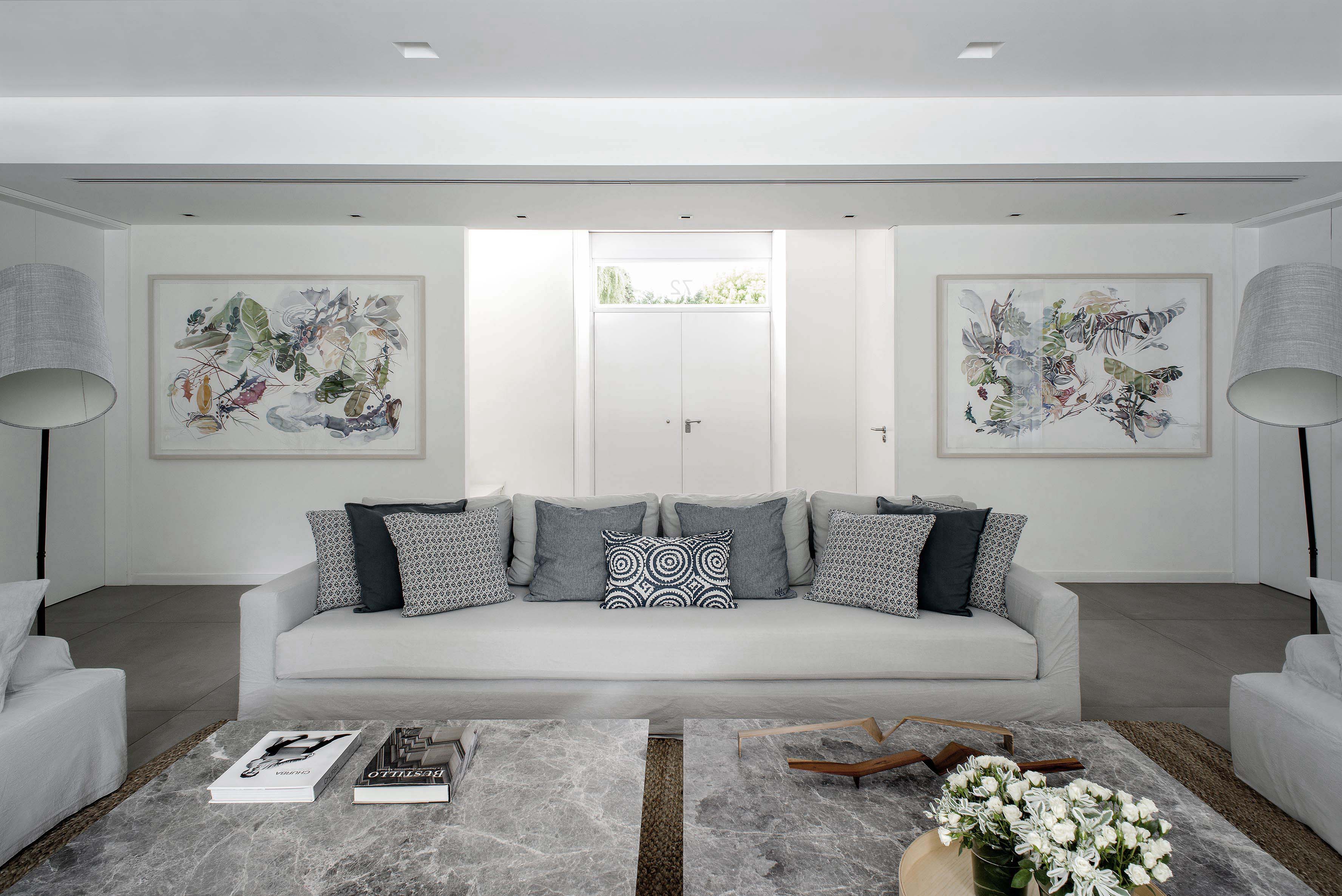 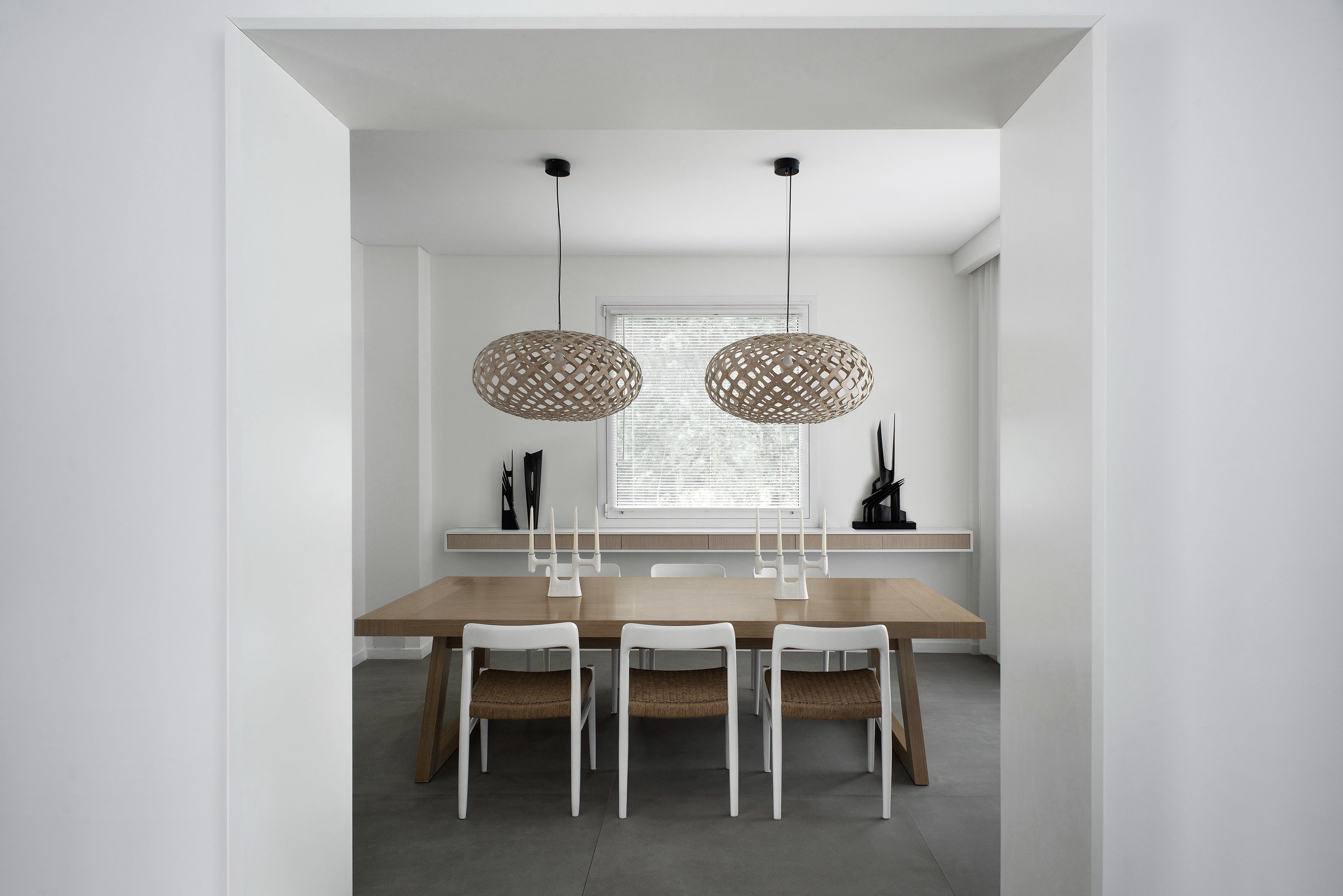 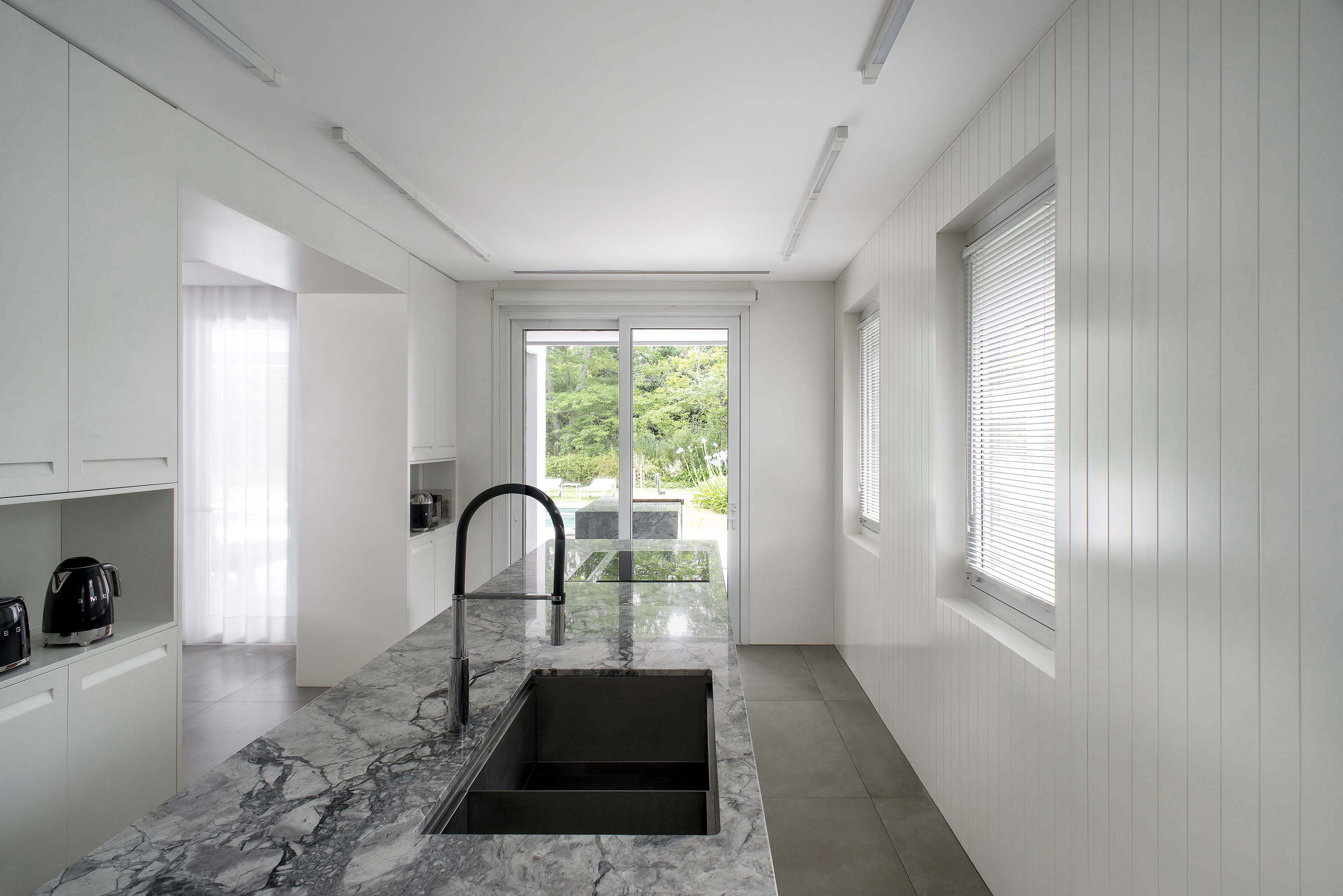 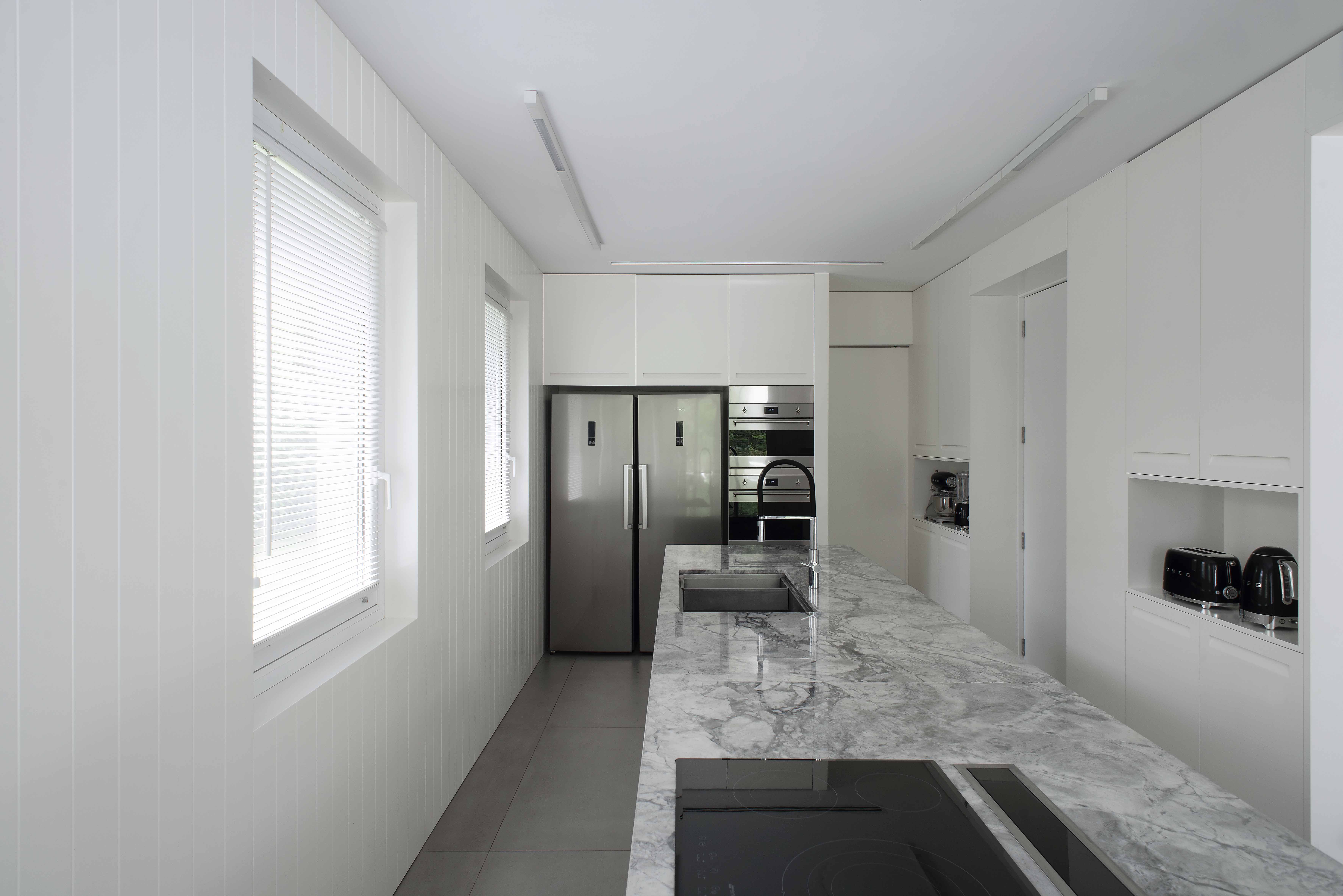 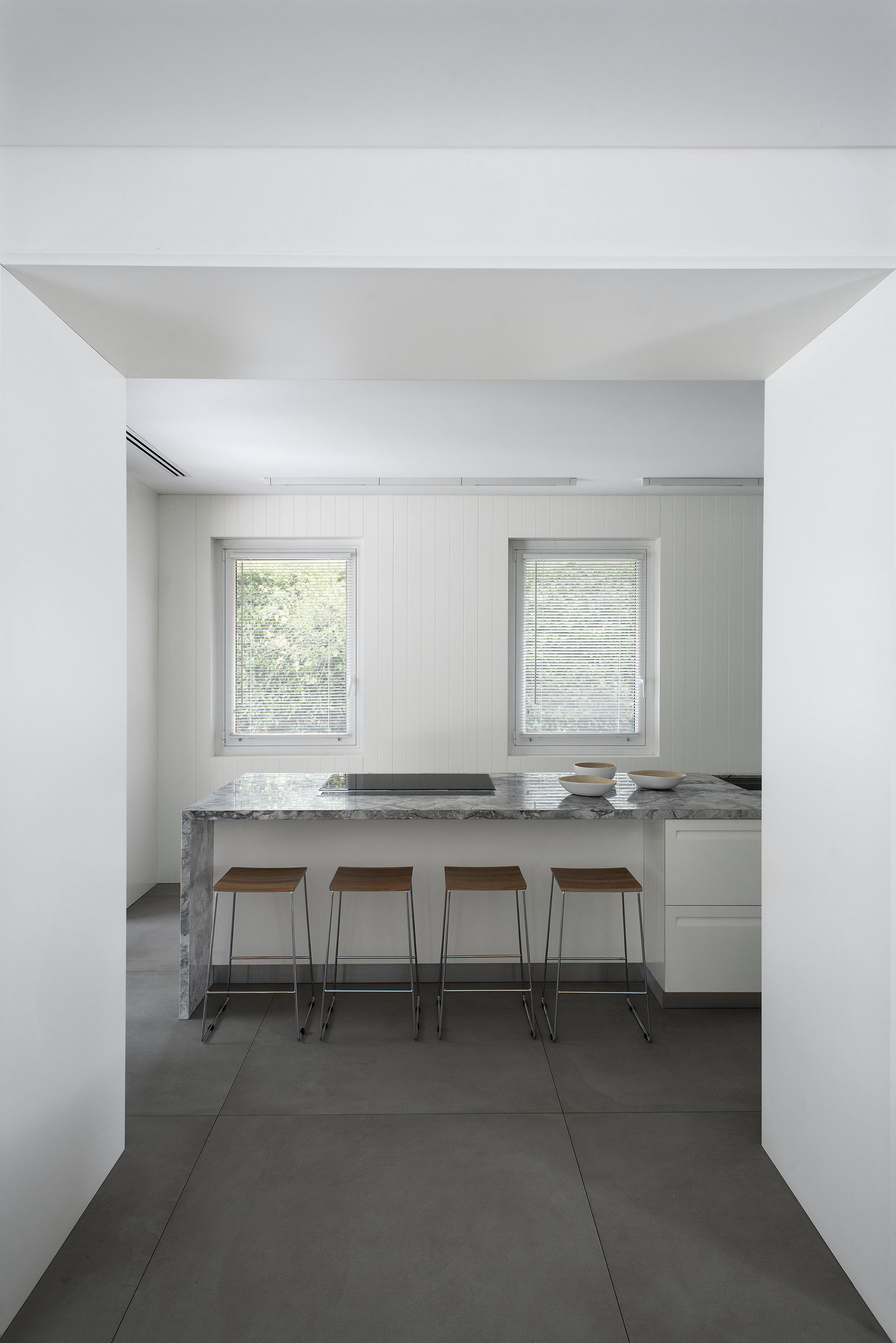 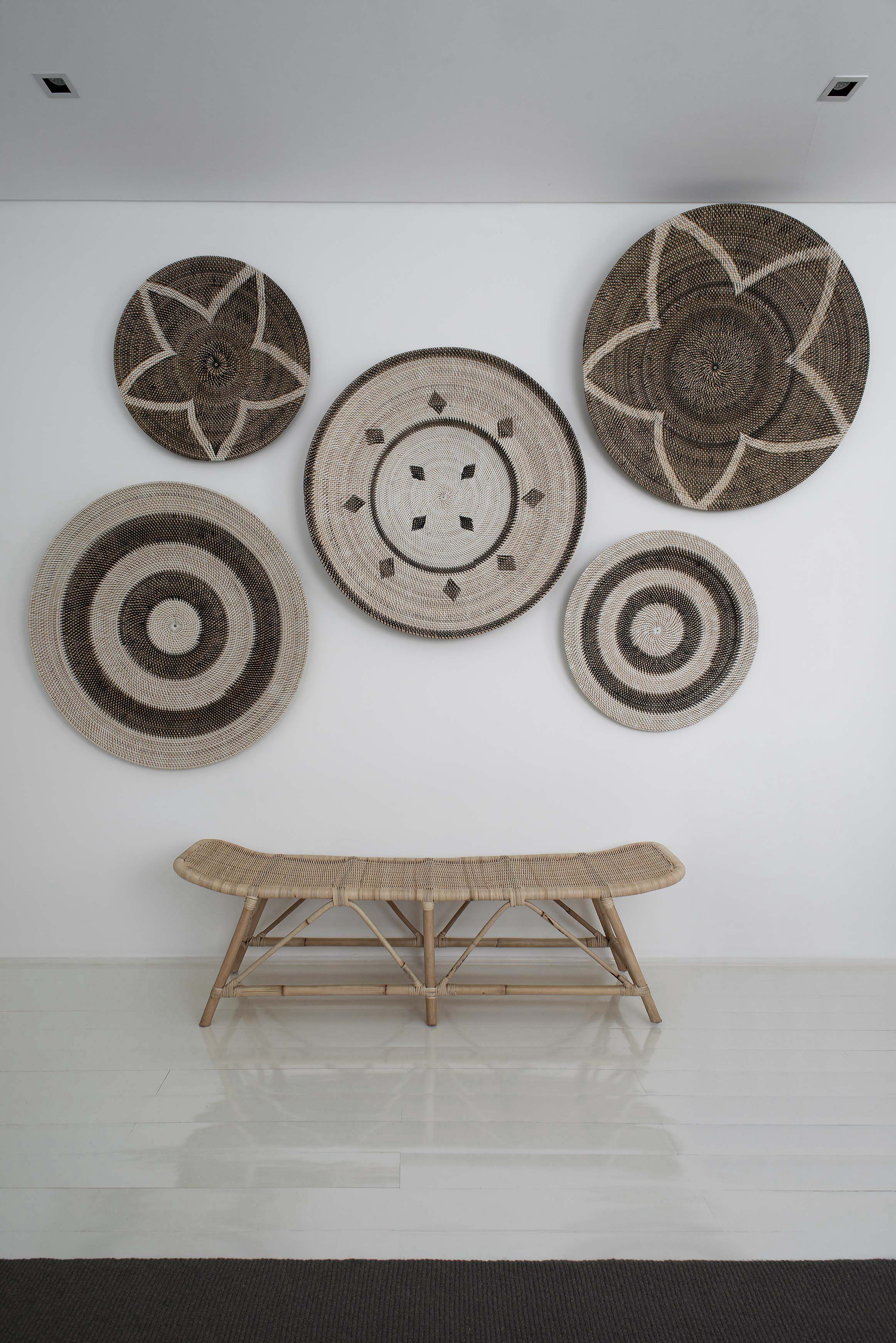 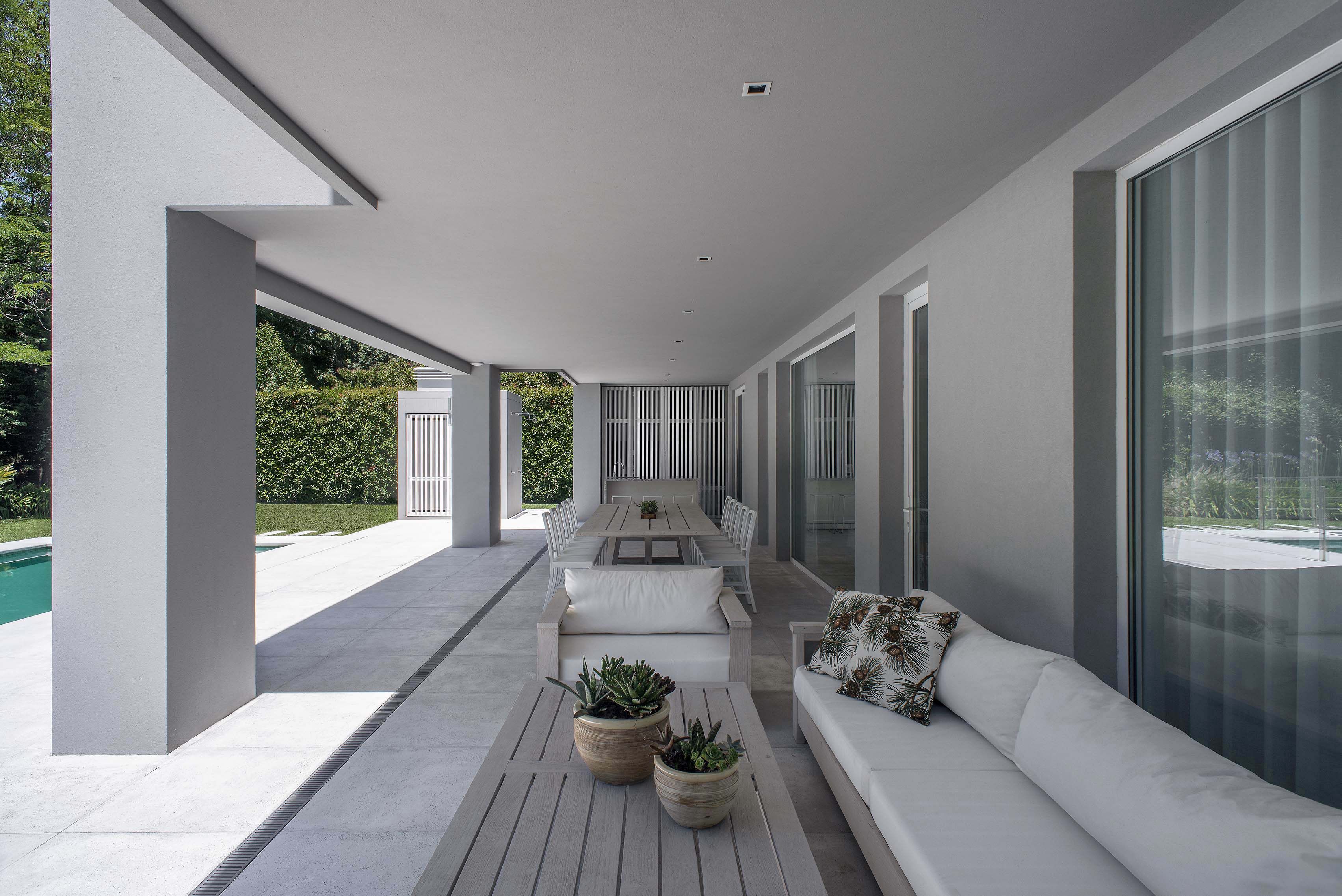 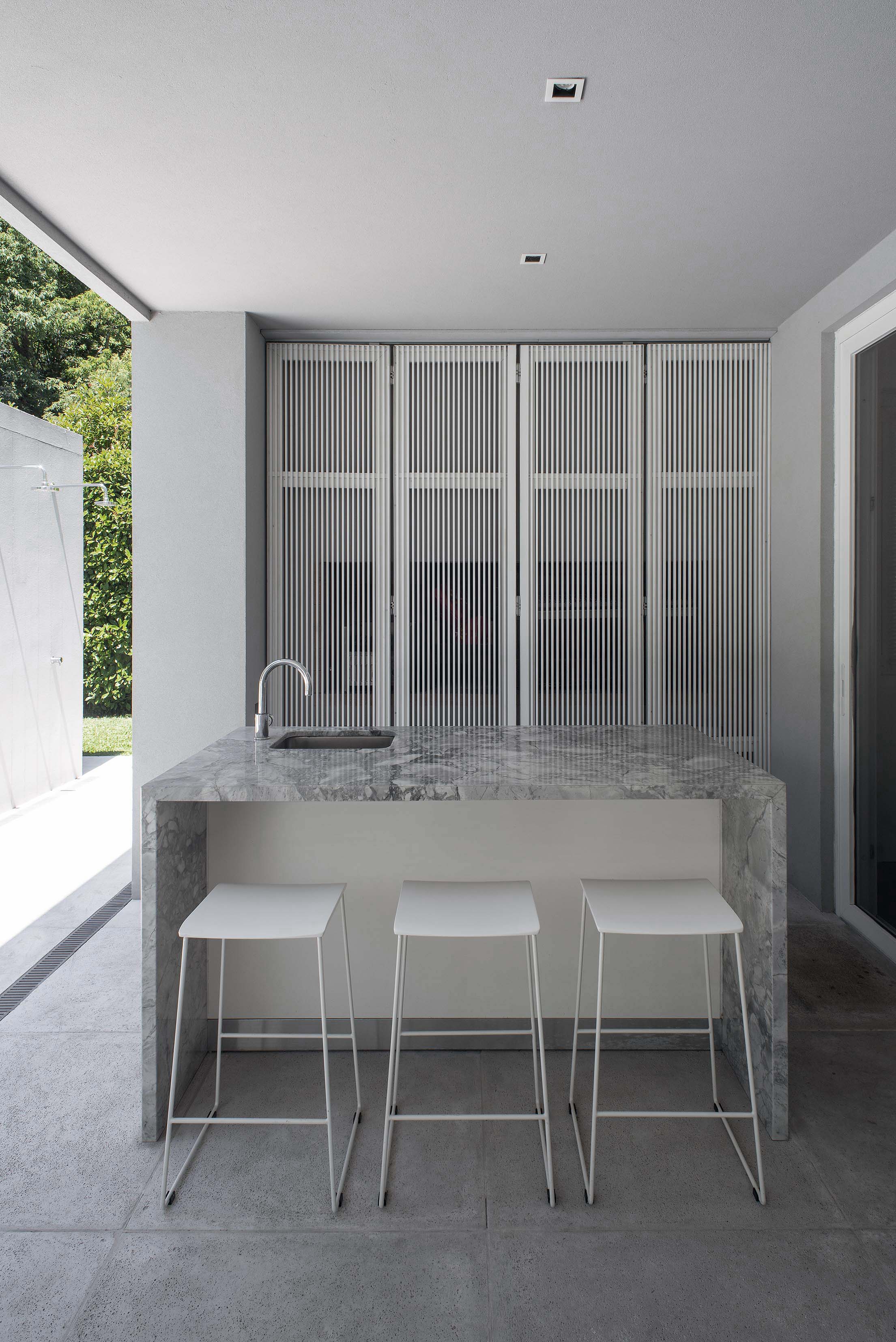 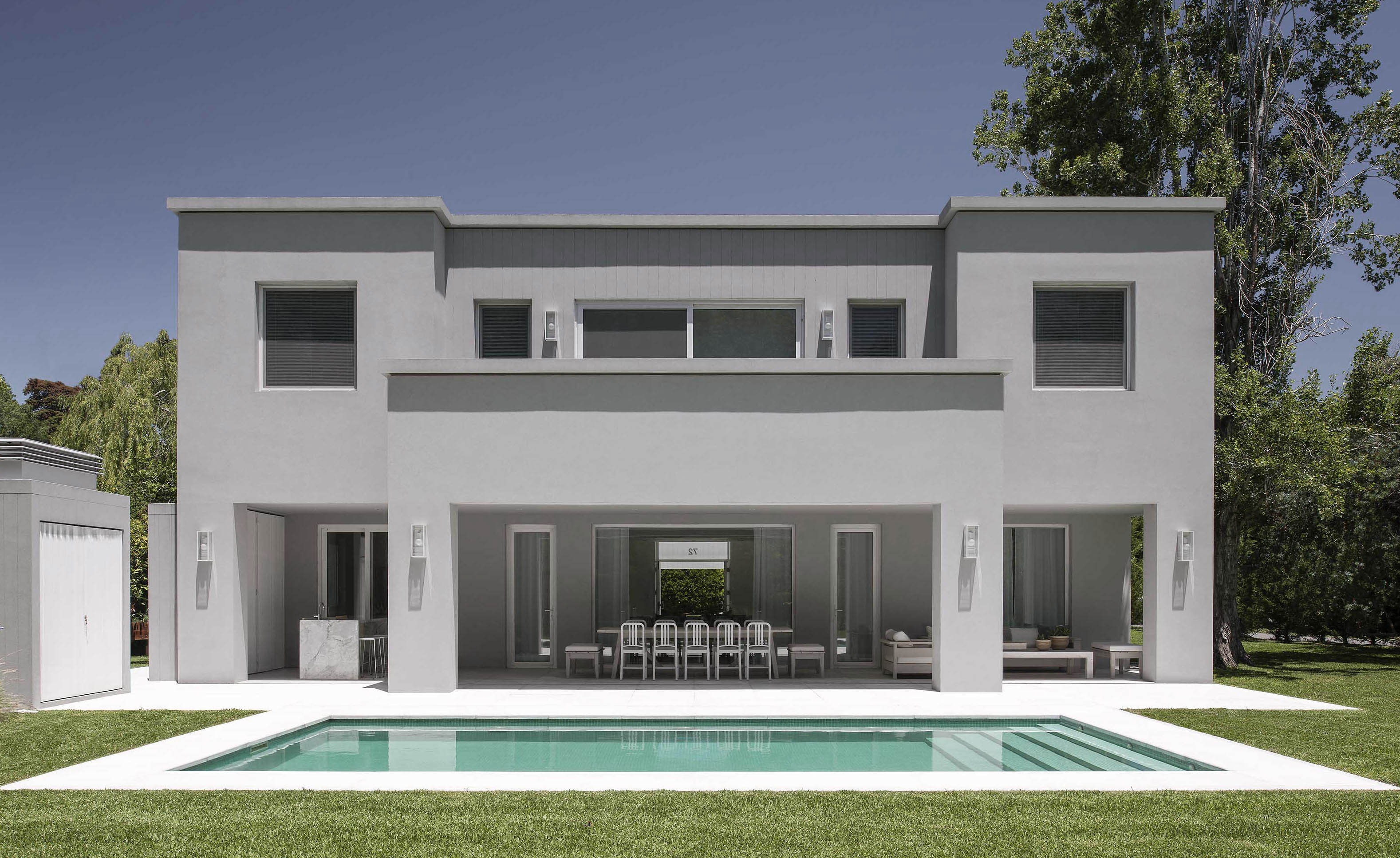